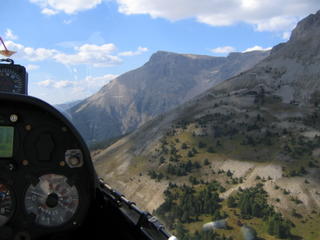 Yesterday and today have given us perfect flying conditions with most of the local sources of lift working in their typical manner (unlike Sunday and Monday). Chip Garner arrived yesterday, and Chip is taking his orientation flight in the Duo Discus with instructor Olivier Darroze.

On August 30, Tim flew the LS-6 for the first time. He flew together with Vladimir Foltin of Slovakia, who is getting used to his borrowed DG 808, and Olivier with a student in the Duo Discus. After a six-hour flight through the mountains, Tim pronounced this one of his best flying days yet. All of the mountains and areas have names. Some are the given names, like Pic de Bure (the name of a mountain) but others are just colloquial glider pilot names (like "la route") The 500 - 600 km long grand tour included Plampinet in the north, Col du Vars, Pic de Bure, Col du Rousset, Serre de Montdenier in the south, and a run along the Parcours to La Dormillouse. 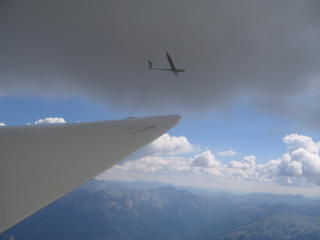 Sebastian Kawa (Poland), Club Class World Champion 2004, is flying the new Diana 2 in the contest. Tim flew along with him yesterday, as pictured here. The distinctive feature of the Diana is its very thin tail area. Here, Tim is flying along with Kawa on August 30. Here's the Diana on the ground on August 29. 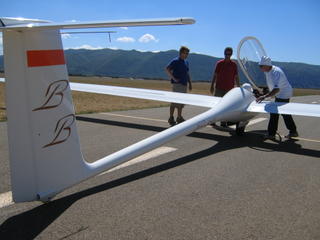 For those of you who aren't familiar with the Grand Prix Racing Format we're trying out, here's the lowdown: the start gate will open at a designated time. The clock will start then for all pilots. It's up to them to be in position to cross the start line at the right time. Then they will race around a set course for about 2 1/2 hours. There will be altitude caps at certain turnpoints. The first pilot to cross the finish line is the day's winner. As we really get underway, I will let you know the ins and outs of the rules. The races will be broadcast on the CNVV.net website (link at right) with live tracking during the task (probably between 1 p.m. and 3 p.m. here - that would be 6 - 8 a.m. central time.)

Posted by Susan McAllister at 5:26 PM No comments: 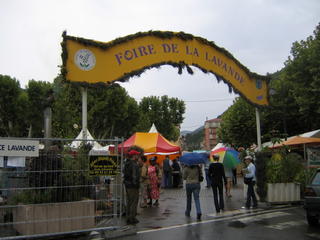 We arrived at the Centre National de Vol a Voile (French National Gliding Center) in St. Auban late on Friday night. We pitched our tent (yes, we are camping in a tent) and started to get settled. On Saturday it rained, so there was no flying. Instead, we went to the town of Digne les Bains where there was a Lavender-fest going on. (Photo: The entrance to lavender world) 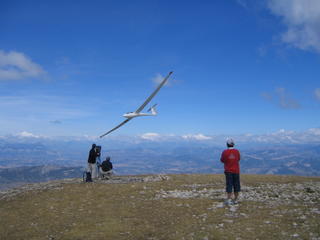 Yesterday (Sunday) Tim flew with Roland Stuck, the competition director of the Grand Prix for about 5 1/2 hours in a Duo Discus.

There's a TV crew here shooting the competition for broadcast - maybe even in the US - as a 30 minute show. I tagged along while they filmed Tim and Roland, as well as other pilots, from the top of the Lure Mountain. It was a spectacular view and the pilots looked like they were having fun, too. (Photo: The Leading Edge TV guys filming as one of the gliders makes a pass. Note the confused hiker looking on.)

The weather for the next three days looks pretty good. Of course, the situation is more questionable on Thursday, when the practice days begin. 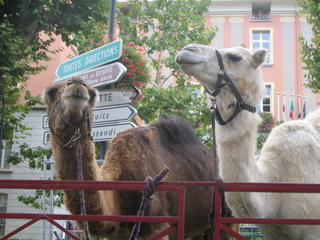 These two camels were hanging out at the lavender festival.)

Preparing for the Grand Prix